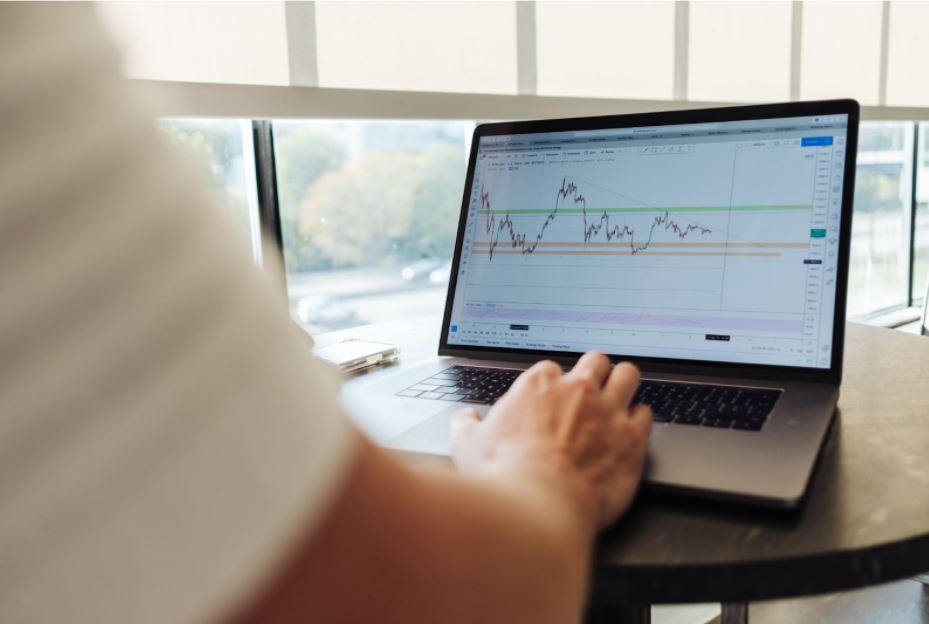 Volatility is a measure of the change in price over time. Volatility is measured by the annualised standard deviation of daily returns for a particular market over a particular period of time. It shows the range to which the market price of an asset is expected to fluctuate over time. The more volatile a market, the riskier it is considered to be and the higher return you can expect if you invest in that market.

Different levels of volatility will be right for different markets and different trading strategies. For example: if a market is very volatile it may be the right choice for day traders but not for long term investors.

Why is Volatility Important?

Volatility is a key risk factor in any trading strategy. The higher the volatility, the morerisk there is that you will make a loss on your trades. You may make a killing one day but you could also find yourself out of pocket for several days or even weeks afterwards. It can be hard to know which markets are likely to be volatile, but if you choose your markets carefully you can trade volatility rather than take the risks associated with extreme market swings.

This analysis looks at how different pairs have fared over a certain time period. Higher volatility often means that higher risk is also taken on when making trades in that pair which could result in greater gains or losses.

What is Volatility in Currency Pairs?

If there were no volatility at all, then you would expect that a currency would gain or lose the same amount every day. But instead, what you see is that some days a currency will rise substantially, while on other days it might fall by an even greater percentage, making it a highly volatile currency pair.

What Affects Volatility in Currency Pairs?

There are many factors that affect volatility in currency pairs. Central banks, liquidity, economic policy, political unrest, natural disasters and weather events are just a few of the key drivers to volatility.

Some countries have more volatile currencies than others. For example, the GBP has been highly volatile in recent years due to uncertainty surrounding Brexit and its economic implications. On the other hand, the USD has seen much less volatility due to policy improvements in the United States.

The majority of this volatility comes from speculation around short term events. Because these events are so unpredictable, many traders attempt to predict what will happen and how it will affect currencies. This activity can cause wild price swings, especially when economic policy is involved. This shows that as always, it is important to keep an eye on political news and other unpredictable events that could affect your trading strategy.

This currency pair is also known for its lack of liquidity, which can cause large price swings if one or two large traders attempt to pick up significant amounts of the currency pair. As a general rule, the higher the liquidity of a currency pair, the lower the volatility. This is because the higher the amount of supply and demand, the harder it is to get a price moving. 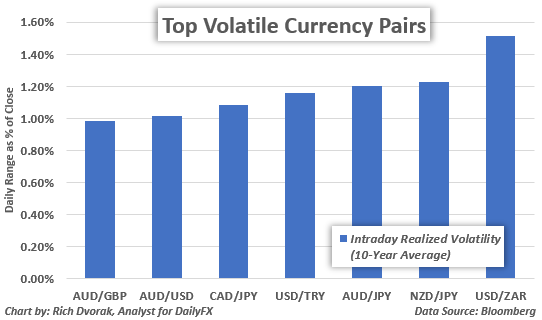 According to this chart by DailyFX, the most volatile currency pairs include:

As illustrated in the chart, these pairs have the highest Intraday Realised Volatility over a 10-year average, making them on average the most volatile currency pairs to trade. These pairs offer relatively low liquidity, increasing their volatility. Though the potential for returns can be high on volatile pairs like these, when trading these currency pairs, traders should consider reducing their position sizes to avoid potentially risky trades and high losses.

Currency Pairs to Keep an Eye On in 2021

While Forex traders aim to capture the most return from their trading capital, it is important for them to understand high volatility pairs can have a higher probability of large profitable trades but they come with more risk. By understanding the most volatile currency pairs and least volatile currency pairs as illustrated in this article, they can determine which pairs are more appropriate to trade based on their risk appetite and market conditions.

Are you ready to start your funded trading career? At Alphachain, we offer expert training with industry mentors as well as access to your own personal trading psychologist to keep you at the top of your game. We even offer fully funded trading accounts. Why not take a look at our Global Funded Trader Programme to learn more?

Read More Market Analysis Today or Check Out Our Alpha Funded Trader Program To Get Started!

Previous ArticleNews Recap: Bitcoin rose to a two week peak on Monday and ether climbed to a fresh record as cryptocurrencies ride higher on a wave of momentumNext ArticleHow to Find Out Your Trader Personality